Please contact us for a discount if you’re going to buy more than one indicator.

What is Support and Resistance?

Support and resistance are important levels where lots of buyers and sellers are willing to trade a security. It is probably the most popular price action concept used by price action traders. If these levels are broken, market psychology shifts and new levels of support and resistance might get established. Although single lines look nice on a chart, levels need to be seen as zones.
Like Al Brooks is saying here “One of the most useful rules in trading is that if something resembles a reliable pattern, it will likely behave like the reliable pattern. In any case, nothing is ever perfect or certain, so close is usually close enough.”

Every swing point can be considered a potential support or resistance level, although major swing highs and lows hold more significance, as they are visible to higher time frame traders too. Trend lines, trend channel lines and moving averages can be support and resistance too (usually very subjective, because of all the variants one can draw them).

Consider the below example for a broken support level.

The market trades back to the support level (here the low of the day). Some traders start buying, when price gets close to it and also scale-in below, in case of a failed breakout.
Despite the buying, price declines further and breaks out of the support level by a significant amount. Traders who bought at the support level and might have scaled in below to lower their average entry price, realize that they might be on the wrong side of the market and place sell orders near or at the broken support level. Early breakout traders might have been able to scalp out parts of their position and are eager to sell more as price pulls back to the former breakout point. This profit taking by early breakout traders and buying by scale in buyers creates a pull-back in the opposite direction of the breakout (the Breakout Test).
After a test of the former breakout level (the broken support) price then continues in the direction of the breakout fueled by the orders of traders, who were on the wrong side of the market and the breakout traders.

Can I simply trade every signal?

Examples from the Blog

Here are a couple of the latest blog posts, that highlight the signals of the S/R Breakout Test indicator in context.
Read more here: More Charts

If you want to limit the number of charts to look at you can setup a chart with multiple time frames (e.g. a higher time frame) on one panel. The higher time frame data series will be overlaid and transparent.
To use the support and resistance of the 30 min time frame on a 5 min chart you need to add a 2nd data series to that 5 min chart and set the chart style to “Line on Close” and the color to “Transparent”.  The “Days to load”, “Trading hours” and “Panel” should match the 1st data series.
Then use the 30 min data series as the “Input series” for the Breakout Test indicator. Make sure to use another line style and thickness of the support/resistance lines to distinguish them from the 5 min lines. 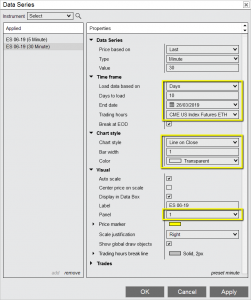 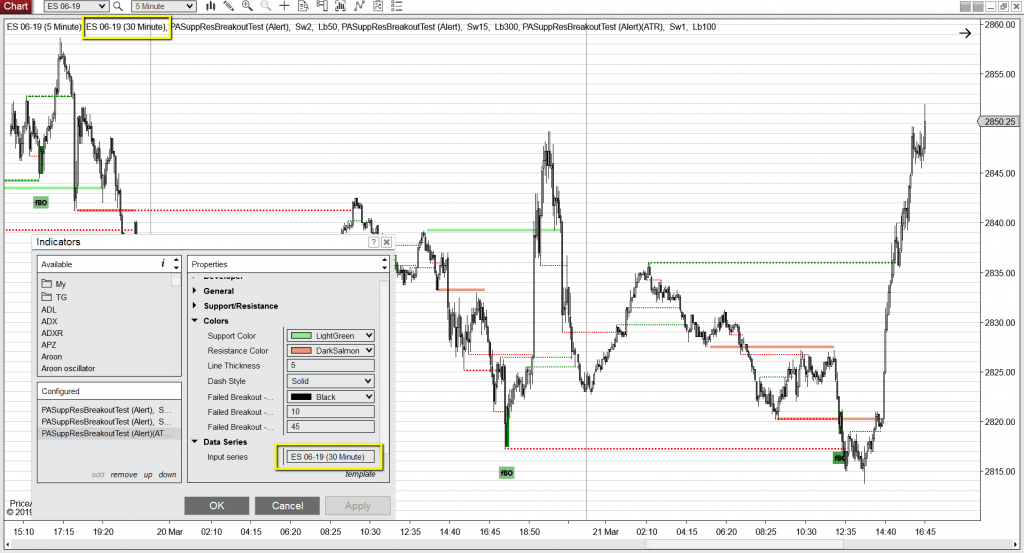 Some traders consider a counter trend bar after the breakout bar a failed breakout. The indicator tries to show those by coloring the background of that counter trend bar (the signal bar). This is no investment advice, the investor is solely responsible for the choice of the indicator signals or entry  method. Please read our Disclaimer.

What are the settings? 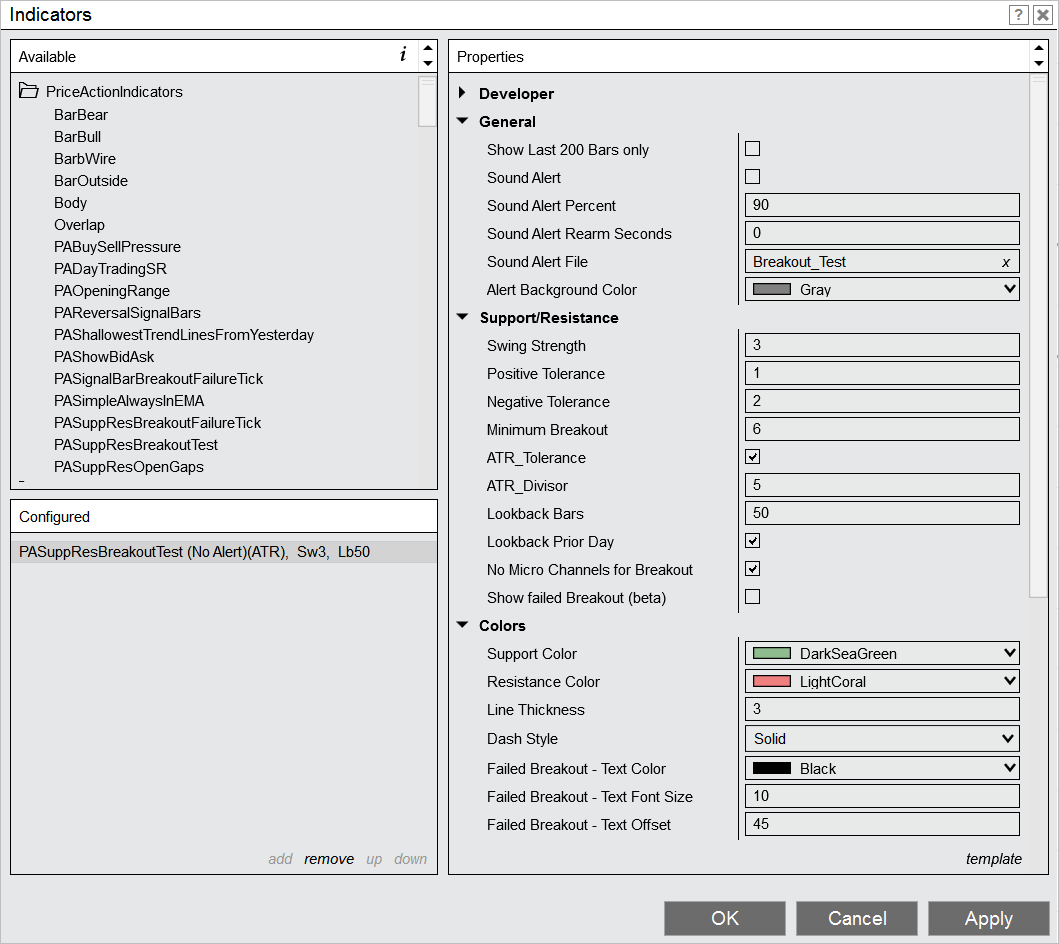 Show the indicator signals only for the last 200 bars, which will speed up a reload of the chart or indicator

Play a sound and show an alert in the alert window

Rearm Sound Alert after (Rearm Seconds)
if not using Sound Alert Percent or for Range, Kagi or LineBreak

Pick a .WAV file from the NinjaTrader sound folder (how to install sounds, see here )

Show Breakout Test lines only for swings with a certain swing strength
e.g. 1 = one bar with a lower high to the left and right of a swing high

The ATR(10) is divided by the ATR_Divisor (higher values give smaller tolerance) and then multiplied by the values set for Positive, Negative Tolerance and Minimum Breakout

Number of bars back to look for a swing high or low
If you want to use a Lookback larger than 256, set “Maximum bars look back” to “Infinite” in the Setup of the indicator. 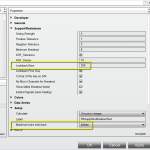 Look back Prior Day

Show support or resistance from the prior session

No Micro Channels for Breakout

A micro channel is a weak kind of breakout, where the 1st bar of the breakout doesn’t have to close beyond the breakout point. The two charts below show how the setting works on a 5 min chart of the ES E-mini.

Use this setting, if using the indicator for automated trading (Bloodhound or your own indicators/strategies).
If switched on, the signal for the Breakout Test (in the data series) is extended to the next two bars after the pivot, depending on price.

e.g. use thicker lines for higher strength support and resistance

DashStyle for Support and Resistance Lines