How to Trade a Reversal Signal

Once a Reversal Signal shows up on the chart place a stop entry buy order one tick above the bar or pattern (for bull). The closest logical stop goes below the bar or pattern – a bar/pattern stop. There are traders, who use a wider stop, than a bar stop, but this is advanced and also requires the ability to scale in.
Read more about other Entry Strategies here. Read more about Reversal Signal Bars & Patterns here.

The bar, that moves past the range of the Reversal Signal triggers the entry order and puts the trader into that trade. This bar becomes the Entry Bar.
A strong Entry Bar (EB) is a trend bar with small tails and preferably larger than the Signal Bar (SB). What gives a big strong Entry Bar?  Lots of traders seeing the trade as obvious and entering on it.
Once price has ticked beyond your Entry Bar, you can move the stop loss below it.

If the Entry Bar (EB) is weak, or there are Sellers on the open (for a bull Entry Bar) there is a good chance that your trade will fail.

What, if the next bar is an Inside Bar (doesn’t trigger the Reversal Signal)?

It’s common for the bar after the Reversal Signal to become an Inside Bar. This is often a 1st Pullback after the possible reversal. Many times the Pullback is some kind of micro Double Bottom/Top, a strengthener for the reversal signal, but also creates some overlap. Overlaps are magnets (small trading ranges) and often pull price back towards them (see 4th. example below).

What, if the Reversal Signal Bar or Pattern gets taken out?

It’s common for a Reversal Signal to trigger on the “wrong side” (price go below 1st for a bull Reversal Signal, vice versa for bear). In such a case it’s better to wait for more price action, maybe a 2nd attempt to reverse.
A Reversal Signal, that has triggered on the wrong side, often creates some kind of Overlap and has trading range price action following it. That means, that there are sellers above and buyers below that Overlap.
In the 3rd. example there is a 2nd attempt to reverse with a good looking bull reversal bar, but you need to watch for a failure closely (here a 6 point failure from a stop entry above the 2nd signal and a 4 point failure of the high of the 1st signal), or better scalp out parts of your position early on signs of weakness.

If you took a trade on a reasonable Reversal Signal, so did a lot of other traders with you and on a failure you often get the possibility to get out with a small loss (on the ES E-mini a couple of ticks only).

When a strong, structurally sound Reversal Signal triggers, but pauses, it probably indicates that there are traders entering counter to your trade or other traders exiting above this signal (for a bull Reversal Signal).

Putting it all together

Often there are several attempts by counter trend traders, before there is a successful reversal. Here the third attempt also triggers the Reversal Signal on the “wrong side”, marked with (R), but buyers below that were able to form a micro double bottom Reversal Signal, which leads to a successful reversal. There was a 2nd Trend Channel Line Overshoot (TCL OS) , which strengthened that signal. Read more about reversals here 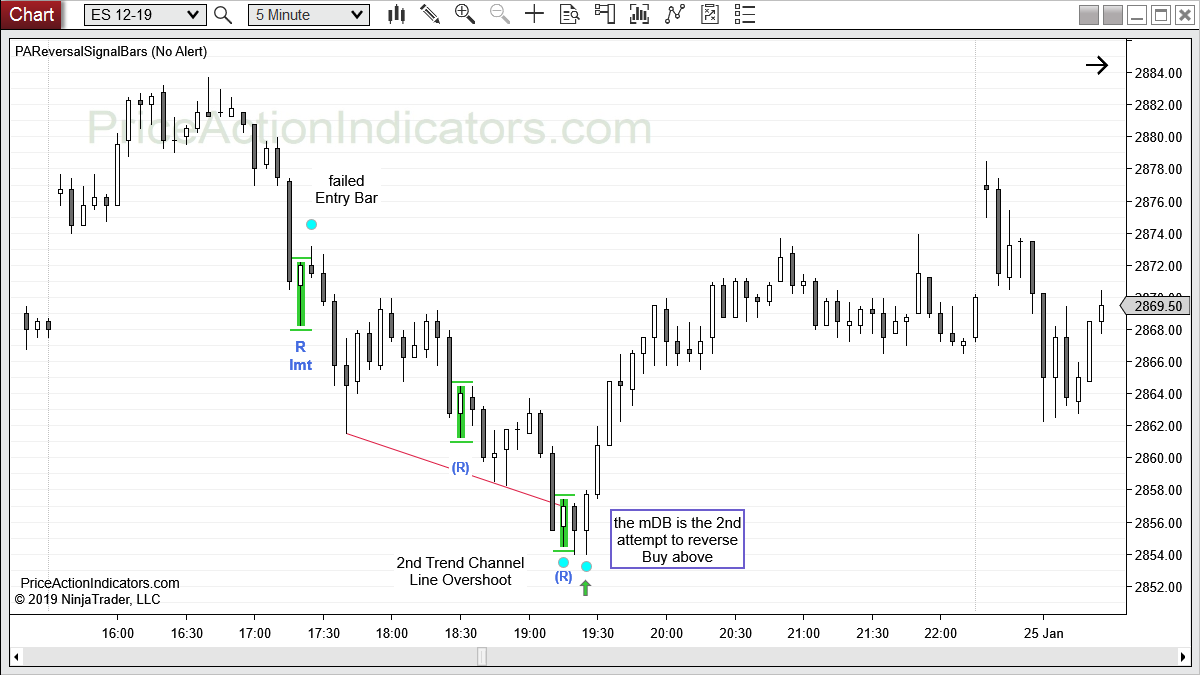 If you’re trading a bull Reversal Signal, exiting below a bear bar during the second push up is a sensible thing to do on a trading range day. However, in a bull trend move, you can usually swing or exit below a bear bar during a third push up.
A lot of traders enter on a stop and use a bar stop loss to trade a Reversal Signal. This means, that the initial risk (the risk you take, when you enter that trade) for the trade is the size of the Reversal Signal Bar/Pattern plus two times the spread. Multiples of that initial risk are often used as targets.
If you’re able to trade more than one contract, try to swing. With the larger risk on the ES it might make sense to trade the MES instead and trade more than one contract.

How to trade a Reversal Signal

Please tell us what you think is missing, any kind of feedback is highly appreciated – contact us

Back to Reversal Signal Bars